Ugandan Goods Sale, Blessing of the Animals, Parish Survey Closes on Sunday, and more in the E-Newsletter for October 6, 2019 – Available in full online here.

It’s often said that St. Francis is the saint who is the most admired—but the least imitated. 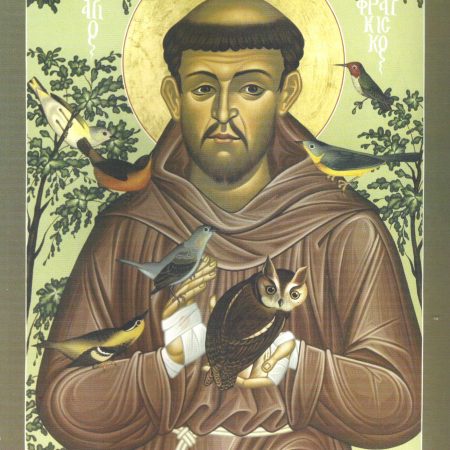 The Feast of St. Francis falls each year on October 4 and it is tradition at St. John’s to have a blessing of the pets on the Sunday afternoon closest to that feast day. This year our Blessing of the Pets will be Sunday, October 6, at 3:30pm in the St. Francis Prayer and Meditation Garden.

Born in the late twelfth century into a wealthy family, he lived a rich and joy-filled life. He loved fine clothes and spent his family’s wealth lavishly. However, his life began to change when he was selling cloth of velvet in the market for his father’s business and a beggar approached him asking for alms. Francis abandoned the market and ran after the beggar, giving him everything in his pockets. His friends mocked him and his father scolded him in a hot rage.

He became even more disillusioned with his wealthy life when on a military campaign against Perugia, during which he was taken captive and suffered a significant illness. He increasingly lost his taste for feasts and the lavish side of life.

He went on a pilgrimage to Rome and joined the poor in begging at St. Peter’s Basilica. It was during this time, as he continued to ask God for enlightenment, that he had a vision of Christ at the country chapel of San Damiano. The icon of Christ spoke to him, saying, “Francis, Francis, go and repair My house which, as you can see, is falling into ruins.”

He immediately thought Christ wanted him to rebuild the chapel, and so he sold some cloth from his father’s store and gave it to the priest. The priest refused the stolen goods and Francis threw the coins on the floor. He hid from his father for a month in a cave near the chapel. When he returned he was beaten and brought before the Bishop of Assisi by his own father in legal proceedings to take away his inheritance. Francis renounced his father and his inheritance and, according to tradition, stripped himself naked. The Bishop covered him with his own cloak.

Francis then lived as a beggar for a time, and began begging for stones. One by one, he rebuilt the chapel at San Damiano, along with several other chapels in ruins. Eventually, he decided to take a vow of poverty and preached around the countryside about the importance of penance, love, and peace. He believed nature itself was the mirror of God calling all creatures his brothers and sisters and even would preach of God’s good news to the birds of the air.

He attracted followers who eventually became the Order of Friars Minor. Though he had previously been a crusader, he visited Egypt and built relations with Muslims. When the Crusader Kingdom fell, it was the Franciscans who the Muslims allowed to remain in the Holy Land on behalf of the church.

Near the end of his life, he had a vision on the Feast of the Holy Cross, September 14, where he saw a vision of a seraph, a six-winged angel on a cross, who gave him the gift of the five wounds of Christ—known as the Stigmata. He suffered from these wounds for the final two years of his life, before dying on October 3, 1226.

Come and join us this Sunday, at 3:30pm, as we celebrate St. Francis’ legacy by blessing our own companion animals, who truly are mirrors of God’s love to us.

But beyond that rather joyful and playful celebration, I hope you will find yourself inspired by the life of this saint and ask what God is asking you to give up so that the church may be rebuilt, peace may grow, and all creation may be renewed.

Read more in the E-Newsletter for Sunday, October 6, 2019 online here.